Check out this short mini-documentary which has been shown on local television stations:  Store Owners Take a Stand for Community Health 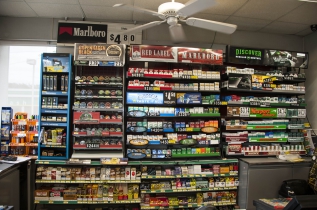 These findings are part of new research released this month on the availability and marketing of tobacco products, alcohol, condoms and healthy and unhealthy food options in California stores that sell tobacco.

Pam Granger, Co-Chair of the Smoke-Free Marin Coalition, stated: “The tobacco and alcohol industry spend about ten dollars to every public health dollar to hook youth and make them life-long customers. It is no accident that stores near schools have the highest concentration of unhealthy or addictive products in youth-appeal flavors.”

“Flavors are the tobacco industry’s recruitment tool to hook new customers. The continued increase in the availability of flavored tobacco products between 2016-19 according to the survey data shows just how important the recent unified, countywide response to this issue was in protecting youth from tobacco use. All but one jurisdiction in Marin passed flavored tobacco bans sales since 2018”, said Bob Curry, Local Lead Agency Director of Marin County’s Tobacco Related Disease Control Program.  All the adopted bans on the retail sale of flavored tobacco products have gone in effect on or before January 2020.

The Smoke-Free Marin Coalition vowed to continue its on-going prevention campaigns which focus on changing the environments that support addiction, and keeping ahead of the industry marketing tactics.

One of the key goals of the survey is to examine the accessibility and marketing of healthy and unhealthy products to youth. In Marin County, 33% of surveyed stores still have tobacco marketing in kid-friendly locations, such as near candy or toys or under three feet. “Tobacco advertising shouldn’t be somewhere that’s meant to be seen by kids. Children are cognitively and psychologically defenseless against advertising,” said Curry. “Our youth deserve a fair chance and we have to continue to work hard to provide them with an environment that is not saturated with non-stop exposure to unhealthy advertising.”

“The findings show that while we have made some progress in combatting tobacco, our community’s youth are still surrounded by unhealthy choices and messages in the retail environment,” said Kathleen Koblick, Public Health Division Director, Marin County Department of Health and Human Services.” “Stores play an important role in people’s health because they influence the choices we make. A better balance of options within our stores is what we need to make the healthy choice the easy choice.”

The Healthy Stores for a Healthy Community (HSHC) Survey is the largest scientific survey of its kind in the state and builds upon previous research released in 2014 and 2017 to look at changes in the availability and marketing of the studied products over time. Information collected from nearly 8,000 randomly selected licensed tobacco retailers in all 58 California counties included convenience, gas, grocery, liquor, and drug, as well as tobacco stores; in Marin, 182 stores were surveyed as part of the 2019 wave of the HSHC campaign.

The survey found the following for Marin County:

Between 2018-19, all but one jurisdiction in Marin have adopted ordinances to ban the sale of flavored tobacco products, in response to the youth vaping epidemic. And while the June 2019 survey found that 81% of stores surveyed sold flavored, non-cigarette tobacco products we expect a significant reduction from the 2019 numbers due to Marin Policy Leaders adopting proactive youth access flavor bans since then.

“Marin County Public Health is committed to continuing to work with local health advocates and partners to re-calibrate the balance toward health in our stores”, said Koblick. “We have an important opportunity, now, to re-shape our retail environment and enable all residents to make healthy choices.”

The Healthy Stores for a Healthy Community campaign is a statewide collaboration between tobacco and alcohol use prevention, sexually transmitted disease prevention, and nutrition partners to examine what’s in our community stores and how that impacts public health. 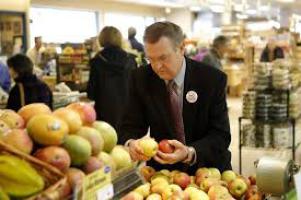 The late Bill Daniels was one of the earliest mainstream grocery store owners to stop selling tobacco, electronic smoking devices, and alcopops (alcohol that comes with sugary pop in flavors that appeal to youth).  Marin County's Tobacco-Related Disease Control Program and the Smoke-Free Marin Coalition created a short documentary highlighting his philosophy about why mainstream grocery stores should avoid selling addictive products made by companies that addict youth.  This documentary has been broadcast on local television stations in many counties and states.  It has also been used to help educate store owners and helped some convert to a healthier (and more profitable) store model.

As the video shows, Bill Daniels was honored by U.S. Congresswoman Lynn Woolsey in the Congressional Record for his decision to stand up to these predatory industries: Stores Take a Stand for Community Health:  https://vimeo.com/155066436

Link to a Marin Independent Journal article about Bill Daniels:

The following transcript as from an interview between a member of the Smoke-Free Marin Coalition with the late Bill Daniels, owner of United Markets, about his financially lucrative decision to stop selling unhealthy, addictive products. His words of wisdom, along with the above mini-documentary, offer encouragement for grocery store owners who are thinking about dropping addictive products targeted to youth in favor of providing healthy options.

EE: Please tell us why you stopped selling tobacco products in your large supermarkets 16 years ago in 2002.

BD: I am president of the United Markets grocery chain. I am also the owner, and it’s a family operation, and I’ve been fighting this tobacco issue since 2002  Tobacco was our biggest seller back in the 1970s – our number 1 grocery selling item. The tobacco companies always promoted them as impulse items. We had a fixture with cigarettes wrapped all the way around.  I kicked tobacco out of our store in 2002 after an employee died of cancer. I believe we were the first supermarket chain to do so. After we lost that employee to cancer, it was not a tough decision.

EE: How did the public react?

BD: We received many pieces of correspondence saluting us for our decision on discontinuing cigarettes in our markets.  It was wonderful because a lot of people have followed my lead, and I see other stores making that decision and I think it’s the right thing to do.  I hope that everyone comes on board and we have a smokeless society.  I just am so into trying to keep the community healthy.  United Markets has a mission to not want to sell tobacco products, e-cigarettes, chewing tobacco, anything that is going to harm the child or harm the individual, causing cancer and diabetes and various other diseases. We have a philosophy on forbidding any tobacco or e-cigarette storefront or window advertising.

EE: How have the tobacco and e-cigarette industries responded?

BD: When e-cigarettes first came out, I had a beverage supplier, actually a wine and liquor supplier approach me, a sales rep, and told me that was crazy if I didn’t jump on the bandwagon.  And he said that e-cigarettes are so big that people are promoting and making room for them in their warehouses.  He told me: “It’s a huge profit center and absolutely will make you all sorts of money.” I told him that I was not interested because I want nothing to do with anything that is going to harm somebody.

EE: How did he react?

BD: He was shocked! He thought, he never heard this before.  He thought that I was the only one that was taking this stand.  And that so many stores are clearing out space in their warehouse to accommodate electronic smoking devices.  The sales rep kept saying:  “This is absolutely what you should be doing, and I don’t know why you wouldn’t take advantage of this;  it  is unbelievable, the amount of profit you will make.” And I said, “That is my decision and I don’t want any part of it.”  After that, sales representatives kept coming with big incentives, offers and stories about big profit, but I turned them down. I am not interested in profit, I am interested in health.  When I discovered that we suddenly carried alcopop (alcoholic pop that appeals to youth), I studied what they were, and then I had them immediatly removed from our store shelves.

EE: What would you say to other store owners considering a similar decision?

BD: I think that that store owners would be extremely smart in making the decision to eliminate tobacco and e-cigarette type products. Be very concerned about the young and their health standards. What I would say to any store owner that approaches me, (and I spoke in front of many groups) is just "bite the bullet", do the right thing.  Eliminate unhealthy products from your shelves. Let's consider health, and forget about profit, just get away from profit.  It (profit) is going to come back to you threefold.

EE: Your store has an amazing variety of healthy food options even though United Markets was never technically a health food store chain.

EE: What role does a grocery store play in community health?

EE: Do you think that community leaders have a role in stores providing healthier options instead of addictive products that are marketed to youth?

Everybody should come on board with us. Elected leaders should also make sure that they are doing the right thing by making sure that the tobacco stays away from the children. If they can entice grocery stores just not to carry it, clear out all these unhealthy products, we will have safer and better communities.  Elected leaders should be very concerned about the health of their community.   Think about your grandchildren about your great-grandchildren. Think about your community, think about good health, and think about what you can do to make your community a better place to live.

We are grateful to Bill Daniels for his example of courage by a business owner to choose community health over profits.  While he will be missed, the Smoke-Free Marin Coalition and our partners in other counties and states will help sustain his great legacy of healthy grocery stores as leaders in community health. For more information contact: sfmcoalition@smokefreemarin.com.